Part One: Implementing NFTs in Sapio

Welcome to day 19 of my Bitcoin Advent Calendar. You can see an index of all the posts here or subscribe at judica.org/join to get new posts in your inbox

For today’s post we’re going to build out some Sapio NFT protocols that are client-side verifiable. Today we’ll focus on code, tomorrow we’ll do more discussion and showing how they work. I was sick last night (minor burrito oriented food poisoning suspected) and so I got behind, hence this post being up late.

As usual, the disclaimer that as I’ve been behind… so we’re less focused today on correctness and more focused on giving you the shape of the idea. In other words, I’m almost positive it won’t work properly, but it can compile! And the general flow looks correct.

There’s also a couple new concepts I want to adopt as I’ve been working on this, so those are things that will have to happen as I refine this idea to be production grade.

Before we start, let’s get an eagle-eye view of the ‘system’ we’re going to be building, because it represents multiple modules and logical components.

By the end, we’ll have 5 separate things: 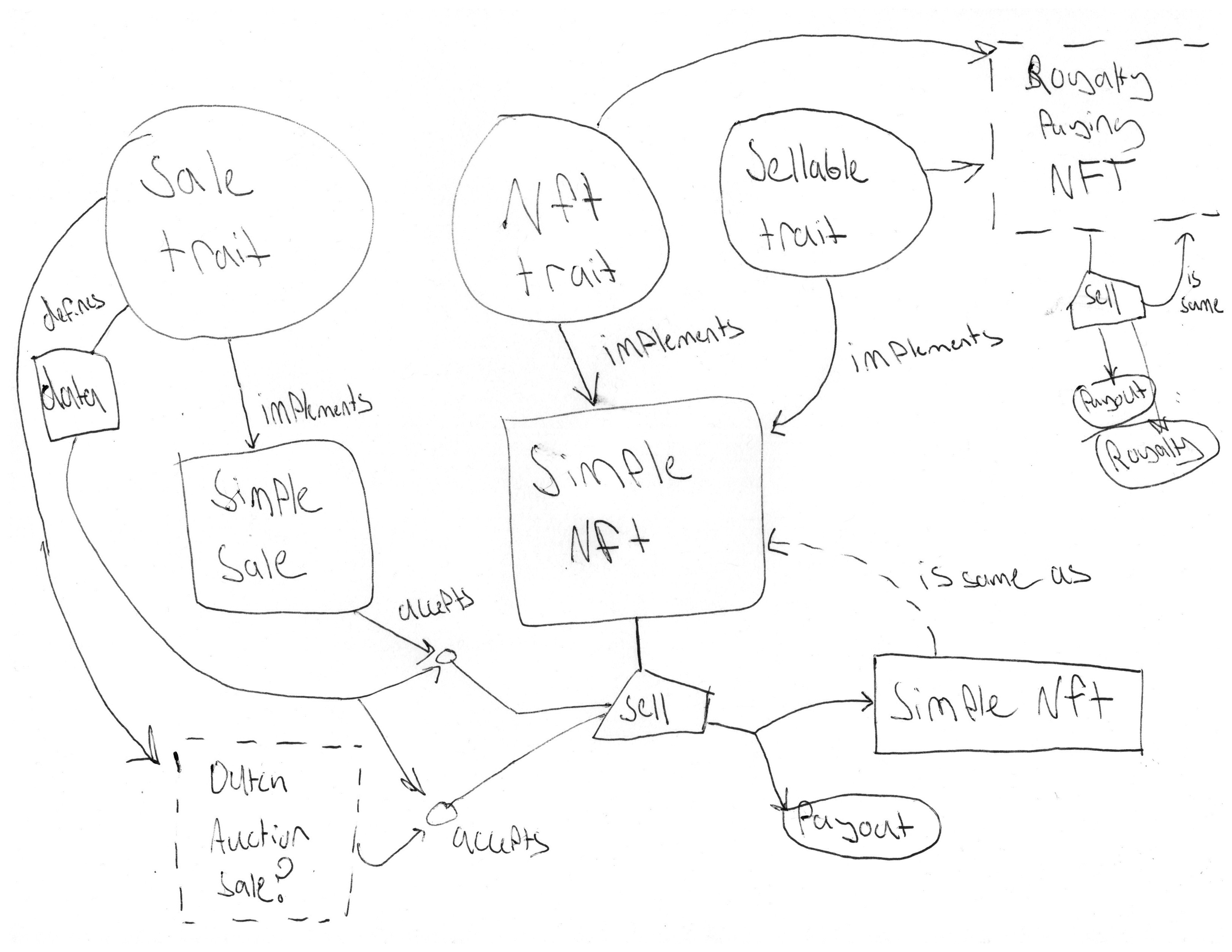 Simple NFT implements both NFT and Sellable, and has a sell function that can be called with any Sale module.

Simple NFT Sale implements Sale, and can be used with the sell of anything that implements Sellable and NFT.

We can make other implementations of Sale and NFT and they should be compatible.

Essentially how this is going to work do is

Normally, in Ethereum NFTs, you could do something for step 2:

with Bitcoin NFTs, it’s a little different. The artist has to run a server that accepts bids above the owner’s current price threshold and returns signed under-funded transaction that would pay the owner the asking price. Alternatively, the bidder can send an open-bid that the owner can fill immediately.

Because Sapio is super-duper cool, we can make abstract interfaces for this stuff so that NFTs can have lots of neat features like enforcing royalties, dutch auction prices, batch minting, generative art minting, and more. We’ll see a bit more tomorrow.

Client validation is central to this story. A lot of the rules are not enforced by the Bitcoin blockchain. They are, however, enforced by requiring that the ‘auditor’ be able to re-reach the same identical contract state by re-compiling the entire contract from the start. I.e., as long as you generate all your state transitions through Sapio, you can verify that an NFT is ‘authentic’. Of course, anyone can ‘burn’ an NFT if they want by sending e.g. to an unknown key. Client side validation just posits that sending to an unknown key is ‘on the same level’ of error as corrupting an NFT by doing state transitions without having the corresponding ‘witness’ of sapio effects to generate the transfer.

Please re-read this section after you get throught the code (I’ll remind you).

First we are going to declare the basic information for a NFT.

Every NFT should have a owner (PublicKey) and a locator (some url, IPFS hash, etc).

NFTs also should track which Sapio module was used to mint them, to ensure compatibility going forward. If it’s not known, modules can try to fill it in and guess (e.g., a good gues is “this module”).

Let’s put that to code:

Shaweeeeet! We have an NFT Minting Interface!

But you can’t actually use it to Mint yet, since we lack an Implementation.

Before we implement it…

What are NFTs Good For? Selling! (Sales Interface)

If you have an NFT, you probably will want to sell it in the future. Let’s declare a sales interface.

To sell an NFT we need to know:

To do that, we need to know:

This is really just expressing that we need to bind a NFT Sale Implementation to our contract. We can express the sale interface as follows.

Getting Concrete: Making an NFT

There’s a bit of boilerplate, so we’ll go section-by-section.

First, let’s implement the logic for selling the NFT… You remember our old friend the Sales interface?

Next, let’s implement the metadata logic. There are a million ways to do metadata, so feel free to ‘skip’ this section and just let your mind wander on interesting things you could do here…

Right on! Now we have made a NFT Implementation. We can Mint one, but wait.

How do we sell it?

We need a NFT Sale Implementation

So let’s do it. In today’s post, we’ll implement the most boring lame ass Sale…

First, let’s get our boring declarations out of the way:

Now, onto the logic of a sale!

And that’s it! Makes sense, right? I hope…

Re read the part before the code again! Maybe it will be more clear now :)